Israel harvested 18,000 organs from dead Syrians during the war

(Jeg la til noen ord her for blogglesernes skyld). 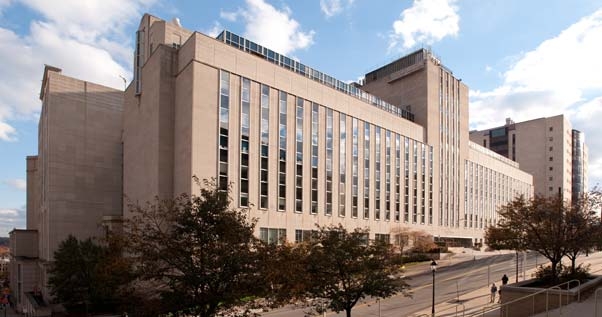 [ Editor’s note: Steve was the real deal, former CIA, Berlin desk with Army intel cover, a Russian speaker who served at the height of the Cold War. What you will read below was enough to get him murdered in the middle of the day while “standing on the plastic” in the offices of Koch/Trump/Scalia/Adelson cohort, the now dead Richard Mellon Scaife, the man who invented the Clinton family conspiracies, the murder lists, all of it, that have kept the undiscerning looking looking away from the Bush crime family and their secret society friends for nearly two decades.

Steve was very much the real deal, someone from inside the CIA openly murdered without even the bother of staging a coverup. Since it was the father of the conspiracy theorists himself responsible for the crime, Richard Mellon Scaife, not one word was said about it by anyone but… me. Why is that?

Imagine this scene, Kangas brought into the offices of Scaife at the Post Gazette in Pittsburgh. Scaife had an small army of former police on his payroll, they ran the Whitewater investigation, blackmailed and bribed, murdered union organizers, political enemies and even kidnapped activists like Kangas.

Did Scaife shoot Kangas in the head personally? Was the body rolled in a plastic sheet, dragged past the receptionists, down the hall and placed in the toilet facility, a gun carelessly thrown down beside it while more cops and a medical examiner, all on the Scaife payroll in his town, Pittsburgh, certifying the “suicide” by maniac billionaire? ]

The wealthy have always used many methods to accumulate wealth, but it was not until the mid-1970s that these methods coalesced into a superbly organized, cohesive and efficient machine. After 1975, it became greater than the sum of its parts, a smooth flowing organization of advocacy groups, lobbyists, think tanks, conservative foundations, and PR firms that hurtled the richest 1 percent into the stratosphere.

The origins of this machine, interestingly enough, can be traced back to the CIA. This is not to say the machine is a formal CIA operation, complete with code name and signed documents. (Although such evidence may yet surface — and previously unthinkable domestic operations such as MK-ULTRA, CHAOS and MOCKINGBIRD show this to be a distinct possibility.) But what we do know already indicts the CIA strongly enough. Its principle creators were Irving Kristol, Paul Weyrich, William Simon, Richard Mellon Scaife, Frank Shakespeare, William F. Buckley, Jr., the Rockefeller family, and more. Almost all the machine’s creators had CIA backgrounds. 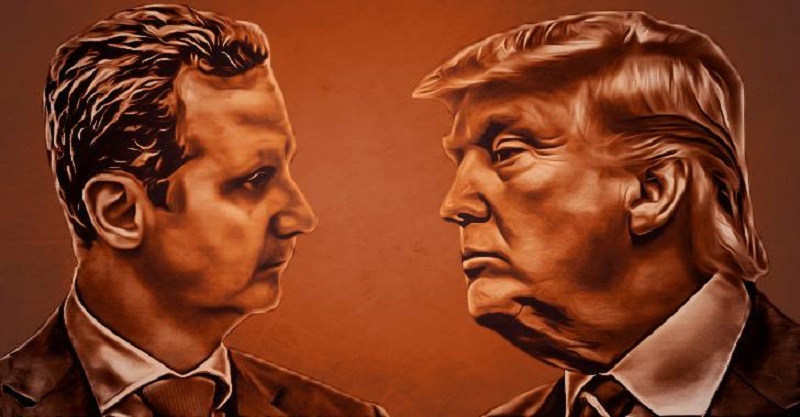 THE US HAS OFFICIALLY LOST THE WAR IN SYRIA: REPORT

[ Editor’s Note: I expected these “defeat” articles to pop up quickly with the publication of the Pentagon stating it would no longer support opposition groups that were not fighting ISIS. In The Century Foundation (CF) July 21 report excerpted below, Shahtahmasebi spotlights not the immorality of the analysis by the CF, but its amorality, a characteristic shared by many in the US coalition. They just don’t have any morals, so that is never an issue for them.

The focus is on the Overthrow-Assad plan not having been handled right, as not enough effort was put into it early enough. And the CF report quickly skips over how, when the US realized this, it pivoted over into bringing proxy terrorist forces used by its old partners in crime, the Saudis.

The UAE and Qatar followed along, with Turkey always pursuing an independent policy, while pretending to be an ally at times, and a victim at others. The Turkish wholesale looting of Aleppo and the oil business dealing with the jihadis should have gotten Turkey thrown out of the UN and NATO, but such things never happen in the real world.

Missing in the CF report is any acknowledgement that what happened in Syria was a war crime, and a crime against humanity on the Syrian people. I watched in 2014 at the elections how the Syrian people voted for Assad and the army in droves, as they had become inseparable by that point. 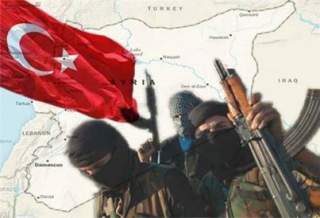 The US’ and Gulf States’ terror sponsoring, and Turkey’s callous looting made an easy decision for most Syrians as to whom the bigger evil was. And this was why we saw the huge push to get Assad to leave prior to elections.

The US knows he is going to win overwhelmingly. So the focus now should be do the State sponsors of terror have to pay the Syrian people reparations, and if so does their exist a forum to really determine such.

Darius correctly points out, as I have, and the CF does not, that the US has Balkanized Syrian with its replacing ISIS with the Kurds, to have a real claim to the land in the north. The US finally jumped on the better horse, and stopped beating the dead horse with “Assad must go”.

So let me tag The Century Foundation with being “fake critics”, as that seems to be the new popular “F-word”. Expect to see more folks like these crawling out from under their rocks to wallpaper over the crimes-against-humanity issue, as that is their job and why they getting funding. They are dependably useful, and VT is dependably exposing them for it. We thank Darius and Southfront for this excellent piece… Jim W. Dean ] 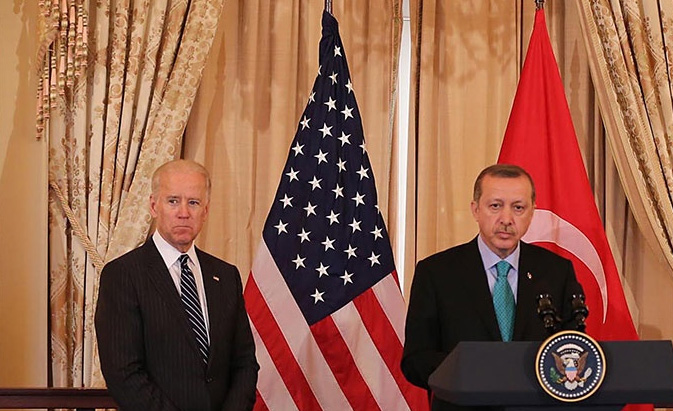 The US-led coalition did not provide previously-agreed air support to Turkish forces and Free Syrian Army rebels when they were attacked by Islamic State militants outside the city of Jarablus in northern Syria, losing several troops wounded in action. 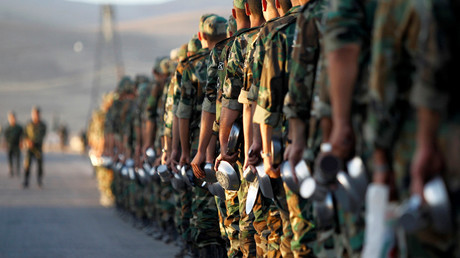 Taking heavy enemy fire, Turkish air forward observers requested immediate support from the NATO airbase at Incirlik, from which the US-led coalition’s aircraft operate. The agency’s report also said that some US aircraft were already airborne for a regular patrolling mission.

However, the US command was reluctant to provide air cover and reportedly delayed scrambling jets for about an hour, making excuses, though such scenarios were previously agreed between the US and Turkish militaries, according to Anadolu.

In the meantime, a Turkish tank which supported advancing rebels was hit by a rocket fired by Islamists, wounding three soldiers, an FSA source told the news agency.

“We could have lost many people,” the source said. “The Americans had promised to provide air support in case of an emergency, but they did not.

“They should have helped; however, the air intervention came in late because of them.”

Consequently, the Turkish Air Force scrambled its own aircraft which arrived “last minute”and hit IS targets, the source added. US-led coalition jets came in and bombed the area three hours later, and the airstrike was useless, Anadolu said.

Jackie Walker vs The Zionist Inquisition

But once again the paranoid West Jerusalem media got it wrong. This was no anti-Israel event – it was pro-Palestinian supper with proceeds going to MAP (Medical Aid for Palestinians) and the Palestinian Trauma Centre, both of which work flat-out dealing with the horrors inflicted by the Israeli regime.

Jackie Walker vs The Zionist Inquisition

It’s time to end the ongoing and seemingly endless Israeli charade about Iranians supposedly being in the process of developing nukes.

Bibi Netanyahu has been constantly harping that Iran is developing nukes and soon will have a deploy-able nuclear bomb unless stopped. What Netanyahu and Israeli Likudists really want is for the United States of America to attack and invade Iran on their behalf.

Despite all this an Agreement seems to be imminent either now or before summer of 2015 and each of the six nations involved in the talks with Iran including the United States of America seems to be lining up against the criminal regime the Likudists which has been running Israel on behalf of the Rothschild Khazarian Mafia.

More than a few insiders believe that the Likudists stole the recent election which placed Bibi Netanyahu back in power illegitimately according to exit poll data which is strikingly divergent from supposed vote totals.

And was the recent German Airliner crash which had a team of Spanish cyber investigators onboard who were going to investigate Netanyahu’s stolen election caused by an Israeli cyber hijacking of the aircraft’s autopilot ordered by Netanyahu?

It’s time for all to see through Netanyahu’s paranoid delusions and false accusations on behalf of the Likudist nutcases and the Rothschild Khazarian Mafia based within the City of London, a private nation of private Central Banksters.

Yes, it is time to expose the hard cold facts that Netanyahu and Israel Likudists are complete liars and hypocrites because Israel has its own large stockpile of nuclear weaponsand has been threatening most of the World with it according to their infamous Sampson Option first revealed publicly by Seymour Hersh. And as we know, Israel never signed the Nuclear Non-Proliferation Agreement, nor will it admit that it has nukes.

What this means in practical terms is that if the USG ever publicly admits that Israel has nukes, the USG must immediately suspend all foreign and military aid to Israel, and all private aid even from Dual Citizens must end immediately.

Shout it from the Rooftops – Israel has Nukes and is a Criminal Terror State!